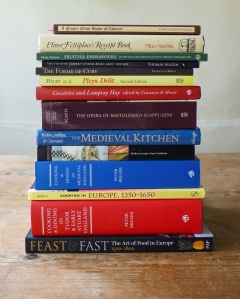 Yes, I’m doing a LOT of reading for my new historical recipes project. But while I research and refine and generally faff about, I don’t want to leave you all hanging, so today’s recipe is for a medieval staple, verjuice.

Verjuice (from the French, jus vert or green juice) was what the medieval cook commonly used instead of lemon juice or vinegar. Made from unripe grapes, crab apples or even sorrel, it is less acidic than either and is a lovely ingredient for dressings, marinades, soups and sauces or even in a cocktail.

Its earliest mention here, as far as I know, was in the 1300s and it continued to be used at least until the 18th century. It’s still widely used in Middle Eastern cuisine today, where’s it’s known as husroum (or ab-ghooreh if you’re in Iran). Elsewhere it was pioneered as a modern commercial product by the legendary Australian cook and food writer Maggie Beer. Tony Cozzi of the UK’s Verjuice Ltd says when his dad had a vineyard in Queensland, he used to make verjuice for her, in company with just about every other winemaker in the region.

Tony now has 24 thousand vines of his own in Sussex, producing about 40 tonnes of grapes annually, and buys in more or less the same amount again to make his product. He makes no wines, just a rather elegant verjuice. A lot of it goes to cocktail bars.

“We assumed it would be a gourmet food market,” he told me. “But people are using it as a non-alcoholic alternative to vermouth in cocktails.” He says Seedlip use his verjuice in their Nogroni, an alcohol-free Negroni mix.

The vinous version of verjuice (say that after a few drinks) normally uses grape thinnings gleaned when some of the crop is removed early to allow the rest of the fruit to ripen properly. Many winemakers just leave it to rot on the ground, which seems like a missed opportunity to me.

We don’t have any vines but we do have a lot of windfall crab apples from a self-sown tree which has been showering us with little green fruits. The 1769 cookery book The British Jewel tells you to “lay them in a heap to sweat then pick from them the stalks and rottenness”. Lovely. If we’d left ours lying around much longer we’d have had a fly-blown apple puree, so we borrowed a fruit crusher and cider press from our friends Simon and Karon and set to work. Be aware, you will be extremely popular with the neighbourhood wasps.

If you don’t have cider-making friends to borrow kit from, you can pulp the apples in a food processor and press them by hand through a fine mesh sieve. You could also (I haven’t tested this) try an electric juicer. It really depends on how many crab apples you have. We had about 8 kilos of prepared fruit, which I think will eventually render about three, maybe four litres of verjuice after further straining and bottling.

Verjuice doesn’t keep forever. Untreated it should be okay in the fridge for a month or two. If you add some Campden tablet (sodium metabisulphate) as I did, it should keep for some months more. A bit vague, I know, but opinions differ. I will report back.

There are various recipes online. This outlines how we made ours. Tony was generous with advice but obviously uses professional wine-making methods, whereas ours is home DIY. And while fans of lacto-fermentation will no doubt have their own preferences and methods, ours is an unfermented verjuice.

As you’ll hopefully be able to see from the strips in the picture below, its pH is pretty much the same as the two commercially-made versions I bought, one of which came from Verjuice Ltd and the other, made from apples, from Herefordshire Wildlife Trust.

NOTE: Since I published this I’ve had an email from the Wildlife Trust telling me they pasteurise theirs for 20 minutes at 72C, which helps preserve it until opened. After that they recommend using it within three days. I’m hoping mine will be usable for longer as I would have to bathe in the stuff to use it in that time! 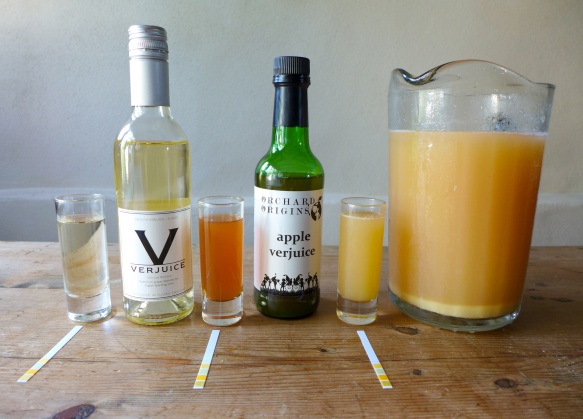 A quantity of crab apples

Please read at least the second half of my introduction before starting and sterilise all your equipment thoroughly.

Bring a large pan of water to the boil and blanch the crab apples, in batches if necessary, for a minute. This helps to kill off any bacteria and enzymes on the skin which might lead to fermentation.

Roughly chop or halve the apples, remove their stalks and cut away any bad parts. Drop them into a big bowl of cold water acidulated with lemon juice. This helps stop them going any browner than they have to.

Pulp the fruit, ideally using a crusher of the sort pictured here, or alternatively in a food processor. 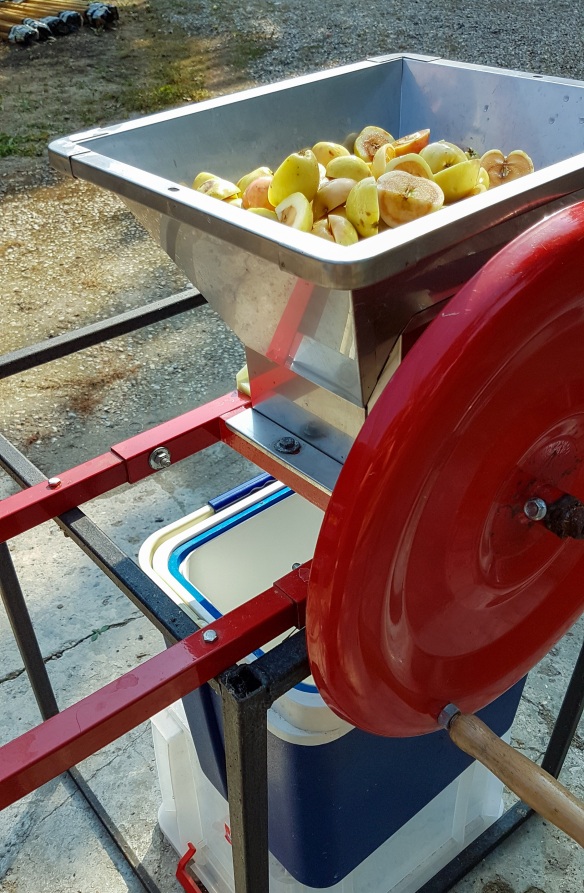 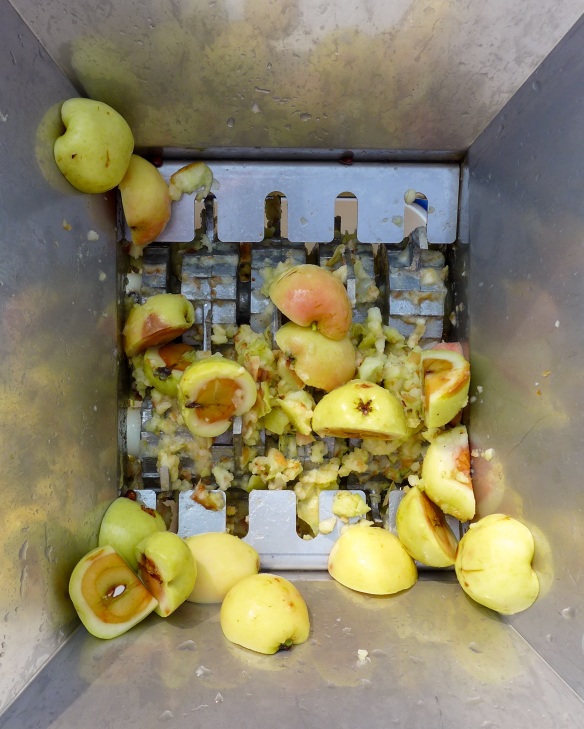 Now extract the juice, either in a cider press or by your chosen method. I tried to upload a video here but I’m obviously technically illiterate, so if you’d like to see the cider press in action you’ll have to nip over to Instagram.

Strain the resulting liquid through a fine mesh sieve, pour into jugs or bottles, cover and leave in a very cold fridge for three weeks. This gives any particulates time to sink to the bottom and will help give you a clearer verjuice, although making it at home it’s never going to be anything other than a bit cloudy.

Strain again through dampened muslin set in a fine mesh sieve, leaving behind any sludge in the bottom of your jug. Pour into sterilised bottles and store in the fridge. Tony advises against freezing it.