Before I started writing this blog I used to write recipes longhand into a series of exercise books. On page one of desserts is one from my sister and scrawled at the bottom are the words ‘possibly the best pudding in the world’.

Hers is a lemon torte made by sandwiching a mix of lemon curd and whipped cream between two sheets of cooked meringue. The dessert is frozen and then partially defrosted to serve. It’s sensational. Liz often makes it for family gatherings and there is usually an unseemly scramble for seconds.

I’ve tweaked it a bit here, adding some rosewater to the meringues and using a home-made raspberry curd for the filling. Passion fruit curd would be good, too. Whichever you choose, it’s best made the day before to give it time to set, otherwise the filling will be too runny. If you don’t want the faff of making your own, buy a good quality curd (Scarlett and Mustard‘s are excellent) and use that instead.

Ingredients for the meringues:

Ingredients for the filling:

For the meringues, line two shallow rectangular baking tins, the sort used for Swiss rolls, with silicone paper. Put the egg whites in a bowl, sprinkle with the cream of tartar and whisk until they hold stiff, glossy peaks.

Mix the cornflour with the sugar, adding it to the eggs a tablespoon at a time, whisking until stiff with each addition. Sprinkle over the rosewater and whisk in.

Spread the meringue on the two lined baking sheets and if you like, dip a skewer into some red food colouring and draw thin diagonal lines on the surface of one meringue. Drag them with the tip of the skewer to give a feather effect.

Place the meringues in the oven, lower the temperature to 140C/375F/Gas Mark 1 and bake for an hour to an hour and a half or until crisp. Allow to cool.

For the curd, sterilise a medium jam jar and set aside. Puree the raspberries in a food processor then push through a sieve, discarding the seeds. Rinse the sieve, beat the egg yolks and sieve into the bowl with the raspberry puree. Stir together.

Heat an inch or two of water in the bottom of a double boiler or bain marie and put the butter, sugar and lemon juice and zest into the top half, making sure its base doesn’t touch the water. If you don’t have a bain marie, use a heat-proof bowl that fits over your saucepan. 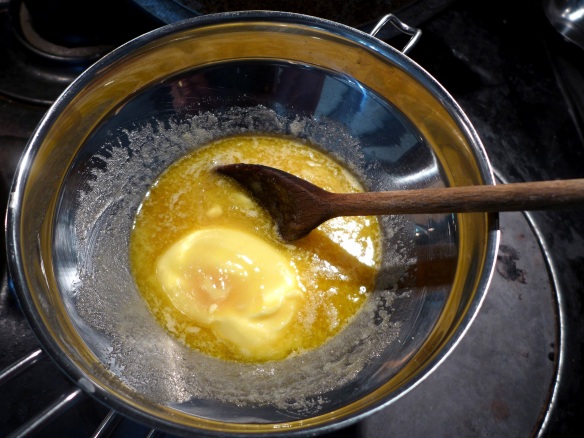 Heat, stirring from time to time until the butter has melted, the sugar has dissolved and you have a smooth mixture.

Pour in the raspberry and egg yolk mix and stir constantly until it has thickened to the consistency of loosely whipped cream. If it looks as though it might boil or curdle, remove from the heat and beat it hard before putting it back on the stove.

Pour into a sterilised jar and allow to cool completely before putting on the lid.  Leave in the fridge overnight: it will thicken further as it cools and will keep for up to a month, refrigerated.

To make the torte, whip the cream until it stands in soft peaks then beat in the chilled raspberry curd a tablespoon at a time. It will turn knicker pink.

Lay a large piece on foil on a tray big enough to hold the finished torte. Lay one rectangle of meringue, rough side down, on the foil and cover with the filling. Put the second side on top, rough side up, wrap and freeze.

To serve, unwrap the torte and transfer to a serving tray. Leave at room temperature for 20-30 minutes, by which time the filling should have softened enough to cut – a hot knife helps. Just before serving, scatter with fresh or sugared rose petals.

A sharpish raspberry coulis helps to cut through the sweetness of the meringue.

Additional pouring cream is an extravagance but rather good.