When I first launched this ‘basics’ series I asked for suggestions from readers. Quite a few people asked how to make stock. I must admit I’ve been postponing a response as it’s a thorny subject.

If you’d like to know how to make a restaurant-standard demi-glace, or a bone broth that’s simmered for 24 hours, you’ve come to the wrong place. I don’t have the patience for the first or the inclination for the second.

The stock I make most often is made from the leftovers of a roast chicken, sometimes with the addition of fresh chicken wings or giblets to bolster the flavour. I have no qualms about chucking in a chicken stock cube, either.

It is the basis for many of my soups and sauces and adds flavour to my rice dishes. I like it because it means nothing goes to waste, but mostly because it tastes so much better than bought stock. It’s cheaper, too.

Made well, it’s so good that it will set to a jelly and be flavoursome enough to eat as a broth in its own right. You get out what you put in, so the carcass of a good-quality chicken will give you a better stock than one you bought cheaps-as-chips. I don’t worry about clarifying it, as I’m more interested in flavour than clarity, but if you want a clear consomme, there are plenty of how-to videos online.

Here’s how I make mine:

Strip the carcass of any remaining meat and save it for another dish.

Top and tail two medium carrots, two sticks of celery and one large or two small onions and chop them up. Leave the skin on the onions if you want the stock to be darker.

Put everything in a big pan with a couple of bay leaves, 6-8 whole black peppercorns and a fistful of parsley or parsley stalks.

Add any raw chicken wings and/or the giblets (not the liver, it can make the stock bitter) if you haven’t already used them to make a gravy. Chuck in any leftover gravy as well, assuming you didn’t add incongruous flavourings to it. This will make the stock cloudy but as I said, I don’t mind that.

A glass of white wine isn’t essential but won’t do any harm. Crumble in a chicken stock cube. Don’t add salt at this point as the liquid will reduce as it cooks and if you want to make a very concentrated stock to save on freezer space, omit the stock cube altogether. 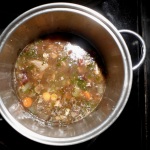 Add enough cold water to just cover the contents of the pan. Bring to the boil, skim any froth, and simmer very gently, without letting it boil again, for two hours.

Once it’s cool enough, strain through a sieve into a bowl. Taste and if it’s not sufficiently strongly flavoured, pour it back into the cleaned pan and reduce it some more.

Add salt to taste: you may not need any if you added a stock cube. Cool completely and skim off any fat that’s floated to the top. This batch gave me about 1.5 litres of stock. It will freeze, chilled and sealed, for up to three months.