I’ve been feeding my cookery book addiction with three new books from East Anglia. If you have a connection with Suffolk or Norfolk or just like good food, beautifully cooked, you might like to add one or all of these to your Christmas list.

‘County’ cookbooks, by which I mean those books which collect together recipes supposedly unique to a particular part of the country, are usually fairly duff.

They are often flimsy affairs designed to make a profit for the publisher (fair enough) while failing to provide anything very substantial for the reader (not so good). They’re frequently to be found in gift shops at tourist traps, to be bought as last-minute gifts for Great Auntie Gertie as an alternative to the usual lavender soap. 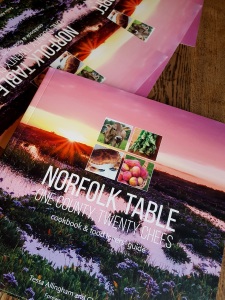 Norfolk Table is something else entirely. A companion volume to last year’s Suffolk Feast, it’s written by Tessa Allingham and Glyn Williams and illustrated by photographer Phil Morley. It’s a lovely book, focusing on twenty chefs who live and work in Norfolk, and packed with cook-able recipes, some cheffy, some simple.

There are too many to list here but you don’t get much more ‘Norfolk’ than the brill with lavender, oyster and samphire from Eric Snaith at Titchwell Manor or the seared wood pigeon with celeriac and Norfolk black pudding from the Duck Inn’s Ben Handley. Ben makes a nifty crab beignet, too. I’m pleased to have a reliable recipe as it’s something I’ve been trying to perfect for a while. The book includes an extraordinarily thorough food-lovers’ guide to the county’s edibles which is useful for visitors and locals.

But it also tells you something about the chefs themselves and crucially, to my mind, their key producers. We are fortunate in East Anglia in having some of the country’s best produce, from land and sea, on our doorsteps and it makes a refreshing change for a book to acknowledge the people who work so hard to get it to our shops and plates.

You can buy the book from any of the featured restaurants or if you don’t live locally, order from Jarrolds of Norwich.

Un-earthed tells the stories of some of the producers, chefs and craftspeople who live and work in Suffolk, particularly along the coast. Produced by the teams behind the Aldeburgh Food and Drink Festival and The Suffolk Coast, it’s worth buying for Keiko Oikawa’s gorgeous photographs alone, although it’s a shame the designers chose not to put one on the front cover. The picture above is mine, by the way. Keiko’s is better.

But Un-earthed contains recipes from direct from some of Suffolk’s best producers: they include a smoked cod and spinach gratin from Pinney’s of Orford, a chorizo cassoulet from Lane Farm, a Longhorn beef and Adnam’s hotpot from Kenton Hall. You don’t get much more field-to-fork (or sea-to-plate) than that. You can buy the book here.

The third book provides an answer to a burning question: just how does David Wicks make his damson and amaretto trifle? It’s a recipe I’ve been trying to worm out of him for several years to no avail. Until now.

David was the chef/patron at 745pm, a restaurant just up the road from me. It was only open on Fridays and Saturdays, it offered a set menu at a single sitting for an inclusive price and banned tipping. You helped yourself to wine from the cabinet and left the bottles at the end of the table to be totted up with the bill. The food was good, locally sourced and imaginative. Tables were much in demand and it was a great sorrow to David’s loyal customers, myself included, when he decided to close down.

But David, working with his food photographer son Rob, has just produced a book, supper@745pm, containing his top recipes. And yes, the trifle is in there.

It’s an entertaining book, full of David’s wry asides on techniques. An example from his battered sage leaf canapes: ‘Turning them over to cook the other side is well-nigh impossible. They behave like self-righting lifeboats.’ Of course, he also tells you how to solve the problem. And you have to like a man who declares that ‘a world without bacon would be as unthinkable as a planet without cheese’.

His confit rabbit with saffron aioli served over tagliatelli was another of my favourite 7.45 dishes, a bit time-consuming to make at home but delicious. Another confit, pheasant with damson agrodolce, had me drooling unattractively over the book. There are many speedier recipes, such as flash-fried smoked salmon fillets and chicken with wild garlic.

David’s alternative to Christmas pudding, a chocolate cup filled with fruity frozen zabaglione, sounds divine. And then there’s that damson trifle, absurdly easy as it turns out. I just need damson season to come round again.

Disclaimer: I was either given these books as review copies or paid trade price. Some of the authors/people featured are my friends. My opinions, however, are my own and as unbiased as is humanly possible.