No, the diet’s not going as well as I’d like, apparently the Sauvignon Blanc Plan is over-rated in weight-loss terms. But if you think I’m being hard on myself, I’m not.

The Mrs Portly I’m talking about is my porcine namesake, raised by our friends Karon and Simon at Stackyard Nursery here in Suffolk. I’ve watched her progress with interest.

Mrs Portly as a weaner – she’s the spotty one

I met her first as a weaner; like me she always had her trotters in the trough. Karon and Simon did all the hard work but I fed her windfall apples, watched her romp and wallow in her paddock and I was there when she was coaxed gently into a trailer for her final journey. Vegetarians and the squeamish can look away now because my interest, unsurprisingly, was culinary and I had a half share in Mrs P’s cute, spotty person.

Am I hard-hearted? No, I don’t think so. I eat meat and it would be hypocritical to take a blinkered view of where it comes from. It doesn’t magically appear plastic-wrapped in polystyrene trays at the supermarket. Mrs Portly had a splendid life and a carefully-managed death, intended to make the process as stress-free as possible. 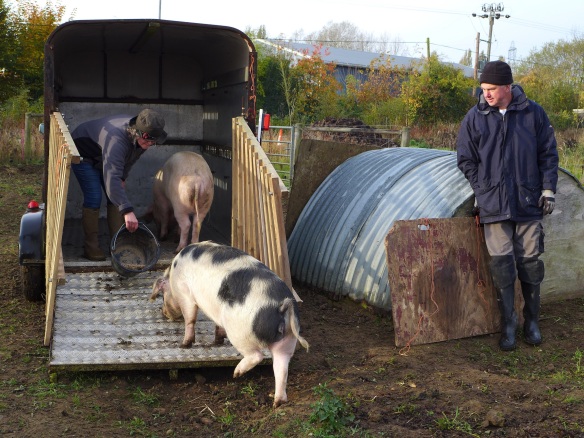 Karon says: “”We slow-grow our pigs during the spring, summer and into the autumn. This traditional method is low impact, using outdoor rearing techniques including feeding our pigs with autumn windfall apples, vegetable off-cuts from our harvest and root crops.

“Our pigs have the freedom to root and behave naturally, this means no stress to the animal. It takes a year to get our pigs to about eighty kilos, smaller to slaughter than a commercial pig that takes five months, but you can taste the difference.”

Mrs Portly is/was a cross between a Gloucester Old Spot (once known as the Orchard Pig or Cottager’s Pig) and a Welsh white, both rare breeds known for for producing pork of superb quality. The next time I saw her was at Palfrey and Hall‘s cutting plant on the beautiful Kenton Hall estate. Now’s your last chance to look away.

Wayne gets to work

I’ve watched pork being butchered before and I’ve even tried my hand at it, at one of the Ginger Pig‘s classes in London. But it takes years to become as deft as the splendidly-monickered Wayne Lemon, who was in charge of reducing Mrs P to neatly tied joints. 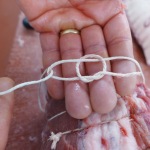 The trick to an evenly rolled joint, apparently, is to start by not tying the first strings too tight and to move back and forth, centre to ends. Wayne demonstrated a hard-to-master butcher’s slip knot (I still can’t do it) and made me photograph it so I could practice it at home. All the time, his hands were moving: sawing, cutting, boning and rolling. It takes him just 30-40 minutes to prepare half a pig.

He is one of four fully-qualified butchers at Palfrey and Hall, set up three years ago at the Kenton Hall Food Hub by Shaun (Palfrey) and Deaglan (Hall) to provide a cutting, smoking and curing service to the local smallholding community.

Deaglan in the walk-in refrigerator

Deaglan says: “We do private cutting for smallholders and farmers as well as supplying farm shops and because we cure meat ourselves we supply some butchers who don’t have that facility.” They have won two gold stars at the Great Taste Awards for their smoked dry-cured streaky bacon and another two for their Wiltshire cured cooked ham. They also do a Suffolk cure, with molasses, spices and beer, using an ale from the nearby Earl Soham Brewery.

It’s obviously a winning formula because their company is growing fast. “When we began it was just the two of us. It’s nerve-wracking starting up on your own, not knowing what customers you’ll get,” says Deaglan.

“But we’ve been busy pretty much since the outset and now there are four of us who are butchers, plus an apprentice, and altogether a staff of six people full-time and two part-time. Next year we’ll open a retail butcher’s shop at the old Post Office in Debenham, with a deli and dry goods.”

Palfrey and Hall will cure and smoke the ham for me for Christmas. I brought the rest home: French-trimmed loin on the bone, rolled and tied joints for big family lunches, belly pork for slow roasting, sausages and chipolatas (Christmas again) and offal for making pates and terrines. Nothing will go to waste, Mrs Portly will be treated with the respect she deserves and I will know that the meat I put on my table was reared responsibly with love and care.

Karon and Simon’s pork is available from Stackyard Nursery at Mendlesham in Suffolk. So if you want joints, chops, sausages and chipolatas, sausage meat, bacon, or gammon joints and steaks, give them a call or drop them a line. It’s good stuff.