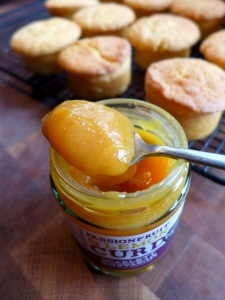 I treated myself to a new cake tin the other day. I don’t actually make cakes all that often (which is usually obvious from their clunky look) but I can’t resist shiny bits of kitchen kit.

Equally, I rarely buy jams and preserves because I make my own, but I have fallen in love with Scarlett and Mustard‘s tangy and more-ish Passionfruit and Lemon Curd.

The two came together in this recipe,as the new tin is a 12-hole, loose-based, mini Victoria sandwich dooflop.

If you want to make one big cake, the quantities below will make enough to fill a pair of 8″/20cm sandwich tins. If your tins measure 7″/18cm, reduce the amounts of flour, sugar and butter to 100g each and use two eggs. Bake them for 25-30 minutes or 20-25 minutes respectively.

I filled mine with the curd and whipped cream. You could replace the curd with jam (raspberry is traditional, strawberry is good) and the cream with buttercream. 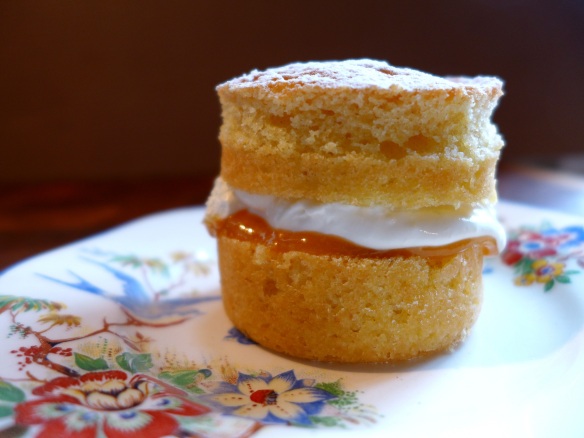 Pre-heat the oven to 180C/350F/Gas Mark 4. Lightly grease the sandwich tins. Sift the flour, baking powder and salt into a bowl.

Put the butter and sugar in another large mixing bowl and beat until light and fluffy. Add the eggs one at a time, alternating with a tablespoon of flour, beating each time to mix and scraping down the sides.

Once all the eggs are in, add the vanilla extract, then fold in the rest of the flour until the mixture is smooth, but don’t overwork it. Divide equally between the tins, filling halfway, and spread level.

Bake in the centre of the oven for about 15 minutes or until risen, lightly golden and a toothpick inserted into the middle comes out clean. Cool in the tins for two minutes before removing to a wire rack to cool completely.

If you overfill the tins and end up with a mushroomy overhang like I did and if such things matter to you, you can remove it with a pastry cutter once the cake is completely cold, although you’ll end up with a giveaway paler line.

Whip the cream and store it in the fridge until just before you want to eat. Then carefully slice the cakes in half horizontally and spread the bottom halves with curd and cream.

Put on the tops, dust with icing sugar and eat straight away. If you want to keep some for later, omit the cream, substitute buttercream or store them uncut.