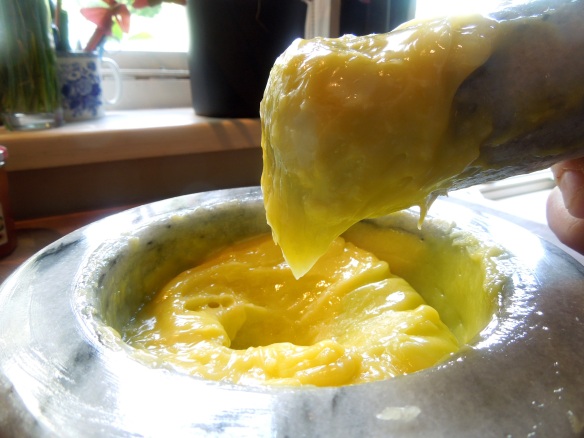 We’ve all reached for a jar of shop-bought mayonnaise but making your own is well worth the effort. It’s a different animal, rich, unctuous and utterly delicious.

Try it on the side with hot or cold chicken or mix it through a potato salad with lots of herbs and maybe a few capers and chopped gherkins and you’ll see what I mean.

A basic mayo will keep for a couple of weeks in the fridge, tightly covered. If you add other ingredients like herbs or garlic, the keeping time will be cut to a week, but I doubt it’ll last that long.

Put the oil into a jug. Place a mixing bowl on a damp folded tea towel to stop it slipping about. Put the egg yolk, mustard and half the lemon juice into the bowl and whisk to blend.

Start adding the oil. a few drops at a time, until the mayonnaise begins to thicken. Whisk in the remaining lemon juice then add the rest of the oil in a thin, steady stream, whisking continuously, until the mixture is thick and glossy.

Sometimes you’ll find that no matter how careful you are, the mayo will split instead of coming together like a shiny ointment. If that happens, just begin again with a new egg yolk and add the curdled mix drop by drop as before.

Finally, whisk in the boiling water to lighten the consistency and season to taste with salt and freshly ground black pepper and more lemon juice if you think it needs it.

If you want to make blender mayonnaise (fluffier and less unctuous than hand-made), double all the quantities (or there won’t be enough to mix properly) and put the egg yolks, mustard and half the lemon juice into the goblet and blend on a low speed to mix.

Add the oil in a thin stream through the hole in the top while the blades are whizzing. Once it begins to thicken, add the remaining lemon juice, blend, then the remaining oil, again in a thin, steady stream. Finally, blend in the boiling water. Add salt, pepper and if necessary, more lemon juice to taste.

Garlic mayo (aioli or allioli): depending on how stingingly garlicky you want it to be, crush anything between one and six cloves of garlic to a paste with 1/2 tspn of salt, before adding a squeeze of lemon juice and the egg yolk, then proceed as above.

Saffron mayo: make as for allioli but put 1/4 tspn of saffron threads in a saucepan with a tablespoon of lemon juice and warm it gently over a low heat. Allow it to cool then add it bit by bit to the finished allioli.

Seafood mayo: Mix 2 tbsp of the basic mayo with the same amount each of tomato ketchup and double cream. Add 1tspn Worcestershire Sauce, a sequeeze of lemon juice and (optionally) a dash of Tabasco.

Tartare sauce: Mix 3 tbsp of basic mayo with 1 tspn finely chopped gherkins, 1 tspn of chopped parsley and 1 tspn of rinsed, chopped capers and a squeeze of lemon juice. You can add 1/2 finely chopped shallot if you like, but don’t do it until the last minute or the onion flavour could dominate.