The turkey is on order and the Christmas cake is made. Time to think about what else will be on the Yuletide table at Mrs P’s. Our family likes a traditional Christmas dinner: turkey with all the trimmings including chipolatas and bacon, and a whopping great piece of ham to eat cold with the leftover bird on Boxing Day (and to pick at every time they pass the fridge, along with a fistful of cold sausages).

Jackie Kennedy lays out the wrapping for the salmon

Usually I buy my chipolatas and ham from a good butcher but this year I went on a Christmas curing course with charcutiers Jackie and Sarah at Marsh Pig in Norfolk. It was great fun and great value and as a consequence I’ve got pork, metaphorically speaking, coming out of my ears.

We made blackstrap bacon cured with molasses and industrial quantities of chipolatas, brined our own ham and made up a dry mix for brining the turkey in due course. That one is a first for me, although it’s normal practice in North America.

What I’d like to share with you today though is Jackie’s recipe for gravadlax, Scandinavian-style salmon cured with salt, sugar and masses of dill. It’s very easy to make and cheaper than buying it from the shops. You can add to the classic seasonings if you want to get experimental. I’m usually a bit of a purist but I tried some different flavourings (coriander and fennel seeds, black pepper and orange zest) in addition to to the basics and really enjoyed the result. 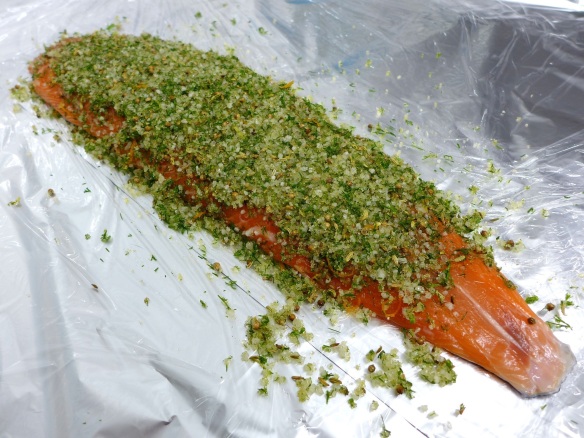 Jackie’s advice on the salt for the cure: don’t use table salt or you will end up with a very salty fish. You can use rock salt or sea salt, but sea salt could end up costing you more than the salmon. Rock salt is fine and you’ve got a better palate than me if you can tell the difference once the salmon is cured.

We ate it with rye bread and mustard and dill sauce. There are almost as many recipes for the sauce as there are for gravadlax (or gravlax – people can’t even agree on the name). You can either make it with cream, which is too rich for my taste with an oily fish like salmon, or like a vinaigrette. I chose the latter. Double the sauce quantities if you’re making it for more than four people.

Gravadlax with Dill and Mustard Sauce 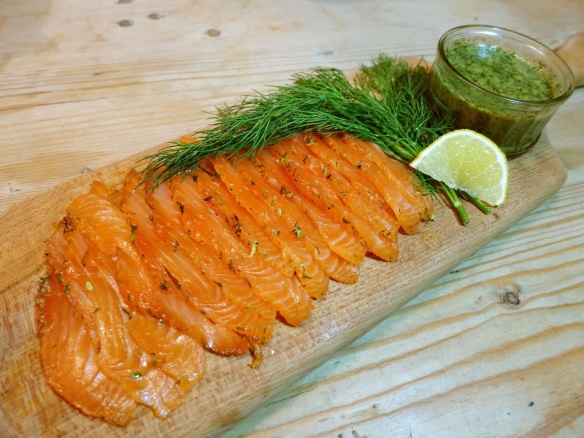 You can either go for a 50-50 sugar to salt mix or 60-40, which is Jackie’s preference. I used Demerara sugar, but as you can see from one of the pictures you can use a Muscovado instead, though it will darken the fish.

Ingredients for the gravadlax:

1 side of good quality salmon, de-scaled and pin-boned

1-2 capfuls of vodka or whisky

Optionally – judicious quantities of your choice of the following:

For the dill mustard sauce: 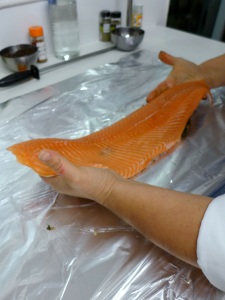 Trim the fish of any ragged edges and check it’s been properly pin-boned and de-scaled.

Mix up the dry ingredients for your cure and add just enough vodka to make a sandy mix. Mix through the chopped dill.

Take two long sheets of foil and lie them slightly overlapping. Top the foil with two sheets of overlapping clingfilm.

Put a third of the cure in the middle and spread it out to roughly the size of your salmon.

Lay the fish on top skin-side down and spread the rest of the mix on the flesh side, concentrating mostly in the middle where the fish is thickest. Don’t worry about the edges and thinner tail end, they’ll pretty much take care of themselves.

Put the remaining two-thirds on the top

Fold in the clingfilm as tightly as possible, followed by the foil, so you create a parcel. Put it in a tray big enough to lay it flat (mine leaked a bit in spite of the wrapping), put a board on top and weigh it down with a couple of tins of beans or whatever from your cupboard.

Leave it in the fridge for 48 hours, turning it halfway through and replacing the weight. At the end of the cure, unwrap the fish and discard the wrappings. Lightly wash the salmon and pat it dry. You can put it back in the fridge, uncovered, to dry out for another 24 hours if you like (I do).

To make the sauce, whisk together the sugar, mustard and vinegar, add a pinch of salt and whisk in the oil until you have an emulsion. Add the chopped dill. You can make this in advance if you like as it will keep in the fridge for a couple of days.

When you come to serve you can either slice the gravadlax thinly at an angle as you would smoked salmon, or skin the fish (turn it over, put a knife under the skin at the tail end and then simply pull it away) and cut into vertical slices.

Once sliced to your liking, arrange on a plate or board, garnish with some fresh dill and serve with the dill and mustard sauce. We tried it with pickled cucumbers, too, but felt they overpowered the fish.

The gravadlax will keep for five or six days in the fridge. Alternatively you can freeze it after curing, tightly wrapped and laid flat. It is a good starter ahead of the Christmas turkey and one you can make in advance. 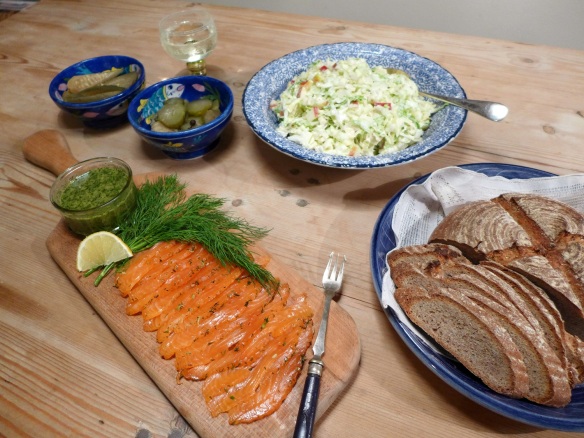 8 thoughts on “Gravadlax and Christmas Curing”