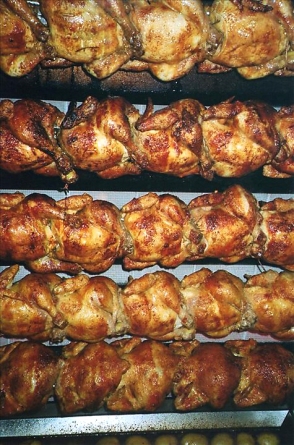 One of my favourite Catalan meals is a takeaway. Pollastre a l’ast is the Catalan take on spit-roasted chicken and it is sublimely good. The chickens sit side-by-side in tiers, each row dripping down and basting the burnished birds beneath. (See what I did there?) They’re deftly jointed by the vendors and put into lidded trays for you to take home.

It’s almost impossible to replicate properly in a domestic kitchen, or even on a barbecue spit-roast, but you can come close. Pollastre a l’ast is flavoured with what in the UK we’d call herbes de Provence – rosemary and thyme, sometimes bay leaves – and often in the home-cooked versions with garlic and lemon too.

For the second installment in my occasional series on Spanish/Catalan food I tried it two ways. The first time I only had chicken joints, so I cooked them in the oven, well-rubbed with olive oil, sprinkled liberally with fresh thyme and rosemary and sitting on a few branches of bay leaves. It wasn’t the same as the chicken we buy from the kiosk next to our local supermarket in Spain but it was still good.

The second time I spit-roasted a whole chicken on the barbecue. I put a lemon half and some squashed garlic cloves in the cavity, brushed it with oil, dusted it well with dried herbs and seasoned it well. It wasn’t quite the same either but it came closer to the original. If you don’t have a barbecue spit, try cooking the whole chicken in the oven at the same heat and for a similar period as described in method two. 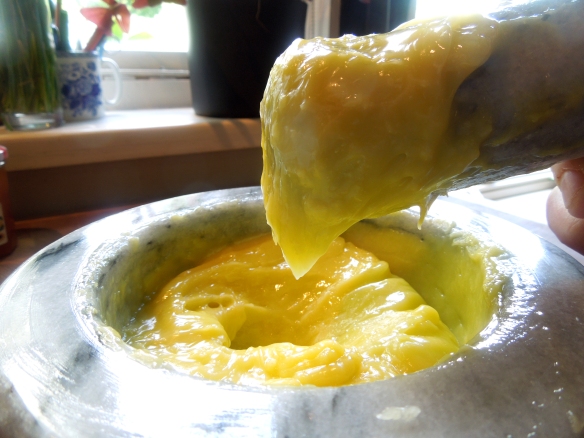 What makes this special and gives it a real taste of Spain is the saffron allioli. Allioli is the Catalan version of aioli. Classically it is made without egg yolks and is deliciously, stingingly hot with garlic. But it’s often made with eggs, too, and that’s the version I’m giving here.

Two fat garlic cloves, I’d say, is the minimum and six isn’t unusual in an ordinary allioli but as I didn’t want to smother the taste of the saffron I used three here. The saffron suffuses it with a golden glow and adds a fabulous flavour.

I’ve never been offered pollastre a l’ast without fried potatoes on the side, but boiled new potatoes are also good, as is a crisp lettuce salad.

A quantity of bone-in chicken thighs and drumsticks or a whole chicken, preferably free-range

Garlic cloves (for the whole bird)

Method for chicken joints in the oven:

Rub the chicken joints with olive oil, and the bay branches too, if using. Place the chicken on the bay and sprinkle with fresh or dried chopped thyme and rosemary. I used about a tablespoon each of fresh herbs for six pieces of chicken. Use a teaspoon or so of each if using dried. Squeeze the juice of half a lemon over the top and season well with salt and freshly ground black pepper.

Roast for around 40 minutes, basting occasionally, until the skin is crisp and golden and the juices run clear when you poke a knife into the thickest part of the meat.  Allow to rest for at least 10 minutes after cooking. 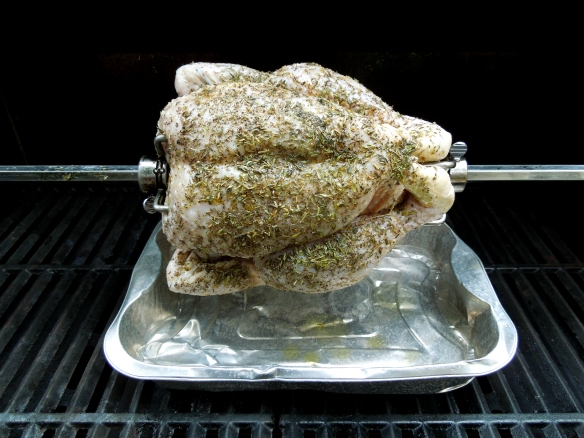 Squeeze the juice of half a lemon over the bird then put the squeezed half in the cavity along with two or three squashed cloves of garlic. Rub the bird well with oil and sprinkle generously with herbes de Provence, season with salt and freshly ground black pepper, then drizzle over more oil so the herbs don’t burn during cooking.

Truss well and place on the spit. Put a foil tray containing around 250 ml of warm water under the bird to catch the drippings. Roast for an hour to an hour and 15 minutes until golden and cooked through – if you insert a knife into the thickest part of the thigh the juices should run clear. Carefully remove from the spit and allow to rest for 10-15 minutes before carving.

While the chicken is roasting, make the allioli. I like to use a pestle and mortar which gives a more unctuous result. A mayonnaise made in a food processor is lighter and fluffier.

Either way, crush the peeled garlic cloves to a paste with the salt and a small squeeze of lemon juice. The lemon juice helps stop it splitting, something it seems particularly prone to doing in humid weather. Add the egg yolks and blend.

Add the olive oil drop by drop and beat it in. Don’t add more until it’s been completely absorbed. Once it’s got to the point where it looks like a stiff, glossy ointment you can add the oil in slightly bigger quantities.

Keep going until you’ve used all the oil and the allioli is starting to climb out of the mortar. If it does split, break another egg yolk into a clean bowl and add the curdled mixture drop by drop until it comes together again.

Put a tablespoon of lemon juice and the saffron in a small pan and warm it gently over a low heat. Let it cool then add it bit by bit to the allioli. Taste and adjust the seasoning, adding more lemon juice or salt if necessary, to your personal preference. Cover and keep in the fridge until you eat – you can make it the day before if you like.

Put the bowl on the table, plate up the roast chicken and any side dishes, and dig in.

12 thoughts on “The Aigua Blava Cookbook #2: Pollastre a l’ast with Saffron Allioli”