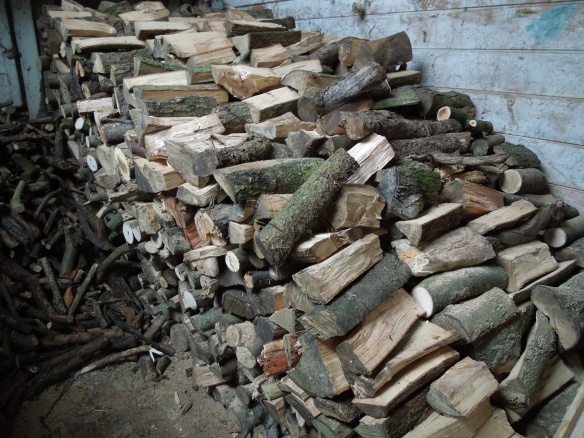 The woodshed is full for the winter and with the hours of daylight shortening, we’ve been clearing the last of the summer fruit and veg from the greenhouse and garden. It’s chutney time.

As I write, the smell of pickling vinegar is wafting through the kitchen as Him Outdoors rolls up his sleeves to make the pickled onions. I’ve been sorting through the last tomatillos and tomatoes because this year I’m doing a variation on my mum’s faithful standby, green tomato chutney. 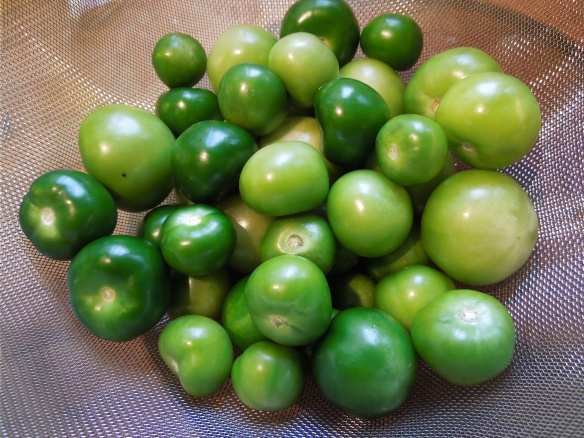 We grew tomatillos for the first time this year and have been amazed at how prolific these Mexican natives have been, transplanted to the Suffolk countryside. They’re related to the physalis, or cape gooseberry, and have a similar papery lantern covering. They’re also related to deadly nightshade, but don’t let that put you off growing them if you get the chance. What doesn’t kill you makes you stronger, right?

They taste rather like lemony green tomatoes and the two are interchangeable in this recipe, so if you’re in the UK and can’t get tomatillos, just use green tomatoes. 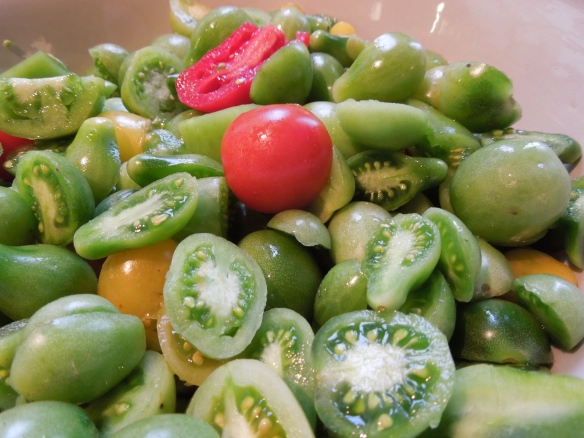 Green tomatoes – and a few stray red and yellow ones

I’ve used the two fruits in a 50-50 ratio and added a couple of dried Mexican chillies to the spice bag in tribute to the tomatillos’ central American roots (no pun intended). One is the ancho chilli, with its mild but rich flavour and the other a hot, smoky chipotle. 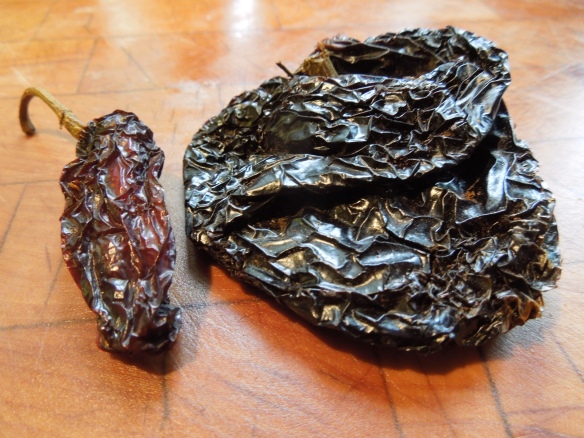 As it was an experiment, I used just one of each. Next time I might be braver. No need to soak the chillies in advance as they’ll be simmering away in the chutney for the duration.

In other departures from  mum’s recipe I’ve cut the fruit and veg a bit bigger to give a slightly chunkier pickle and swapped malt vinegar for cider vinegar.

1/2 lb (225g) crystallised ginger (the kind that comes in syrup in a jar), roughly chopped

For the spice bag:

A few blades of mace

Peel off the papery husks from the tomatillos, if using, rinse in lukewarm water to remove the sticky residue on the fruits and drain.

Wash and drain the green tomatoes and chop them into medium dice, along with the tomatillos, onions and apples. Tie the spices into a muslin square.

Put everything except the sugar and vinegar into a big, heavy-based pan. Bring slowly to the boil, reduce the heat and simmer, uncovered, for around an hour and a half, stirring from time to time.

Then, in another pan, dissolve the sugar in the vinegar. Add to the fruit mixture and boil gently, stirring regularly to stop it from sticking and burning, until it thickens. Mum’s original recipe says 20 minutes but in my experience it takes longer.

Cook it until it furrows to show the bottom of the pan when you drag a wooden spoon through it. Pack into sterilised jars (with plasticised lids otherwise the vinegar will corrode the metal) while it’s still warm but not boiling hot. Seal, and allow to mature for at least two months, preferably three.

I’m entering this for October’s Spice Trail challenge hosted by Bangers & Mash – check out the site this month for more spicy pickles and preserves.

And whoop! I won!

7 thoughts on “Tomatillo and Tomato Chutney”