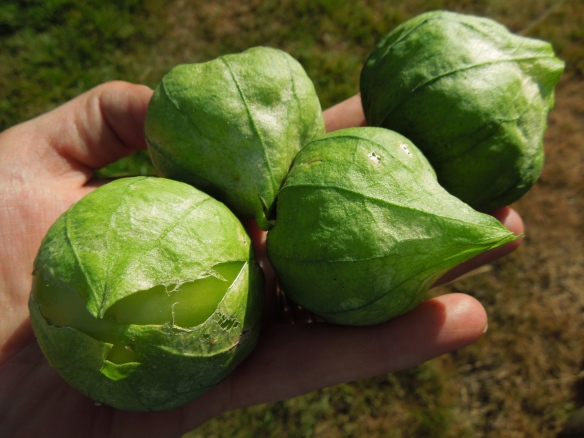 North American readers (and Mexicans) can look away now because this is everyday stuff to them, but I’d never eaten a tomatillo until we were staying with our friends Matthew and Richard in north New York state. Matthew, a superb cook, bought some in the local market and made a fabulous green salsa.

Tomatillos are related to Cape gooseberries and have a similar papery husk. They taste something like a citrusy green tomato. If you leave them to ripen they can be any colour from yellow to red or even purple, but they’re normally picked green, when their lemony flavour is at its best. Raw, they’re quite tart, but cooking brings out their sweetness.

We bought some seeds and grew them in our greenhouse for the first time this year and to be honest, didn’t expect these Mexican natives to perform very well.

Boy, were we in for a surprise. 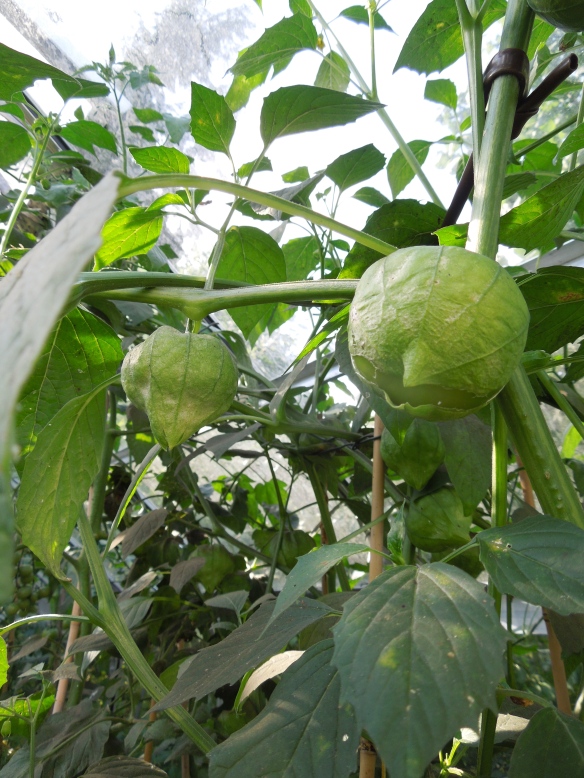 They grew rampantly and within a very short space of time the plants had hit the roof and were covered in small green lanterns which rapidly filled with fruit. Time to turn to Matthew’s cookbook for kids (and grown-ups), Teen Cuisine.

His salsa is great as a dip with tortilla chips but we ate it with chicken fajitas based on a recipe by Jamie Oliver. We used leftover cooked chicken but if you can, start with raw chicken breasts.

Note: you can occasionally find fresh tomatillos in the UK if you hunt really hard or you can buy them online, tinned, from Mex Grocer. Matthew says you can’t substitute green tomatoes for tomatillos here because the taste is so different, but if you’re stuck, check out Wonky Wonderful for an uncooked green tomato salsa recipe. 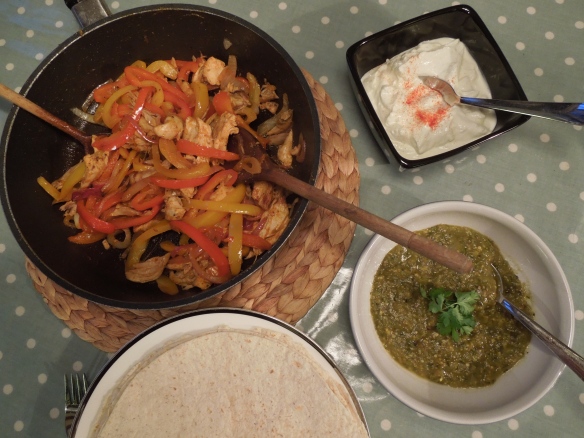 Ingredients for the salsa:

Ingredients for the fajitas:

1/2 large red onion, peeled and finely sliced into half moons

You will also need a quantity of flour tortillas 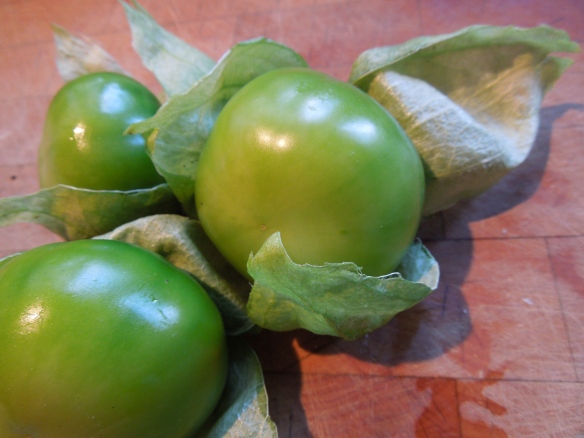 First, prepare the tomatillos by peeling off the papery husks and washing off the sticky residue in lukewarm water.

To make the salsa, put the cleaned tomatillos in a large saucepan with the garlic, salt, chillies and water. Bring to the boil on a medium heat, reduce to a low simmer and cook, uncovered, for 10 minutes until they’re soft but not breaking up. 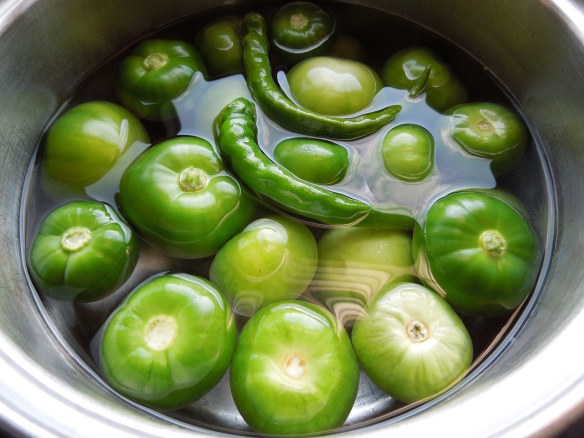 Drain the mixture in a colander over a bowl, reserving 120ml of the cooking liquid. Whizz the tomatillo mixture with the coriander and reserved liquid in a blender or food processor.

Heat a tablespoon of oil in a heavy-bottomed frying pan, add the chopped onion and cook for 4-5 minutes until it is soft and translucent.

Remove from the heat and pour in the tomatillo mixture (have a lid handy in case it spits). Remove the lid and cook over a low heat for about five minutes, stirring occasionally. Allow to cool then refrigerate until you are ready to serve.

To make the fajitas, mix the sliced peppers and onion (and the chicken if it’s raw) in a large bowl with the paprika, cumin, lime juice, oil and black pepper and marinade for five minutes or so. 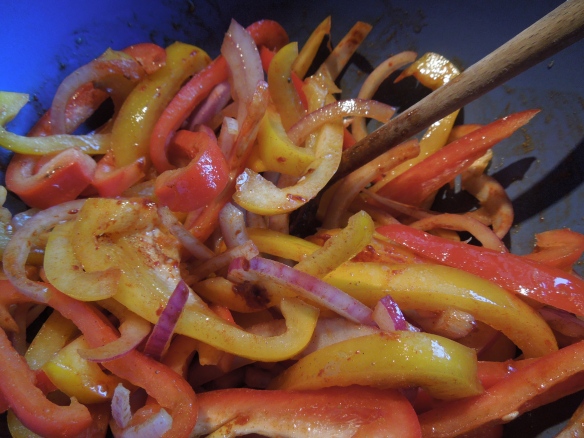 Place into a preheated deep frying pan and cook on a medium-high heat for 6-8 minutes or until the chicken is cooked through.

If you’re using cooked chicken, add it once the peppers and onions have softened slightly, about five minutes, and heat through thoroughly. Keep stirring the pan so the onions and peppers don’t catch. 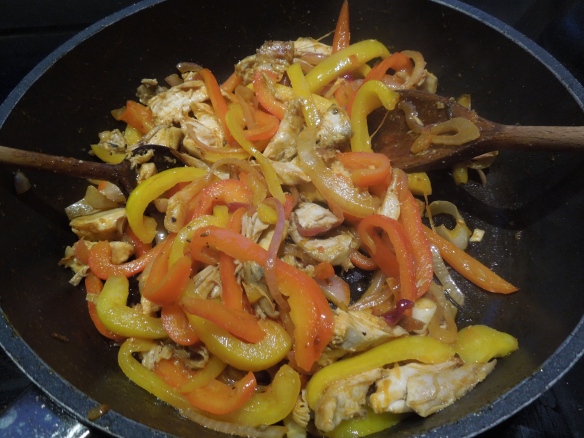 Heat your tortillas according to the packet instructions and serve the chicken mix straight from the pan, with the salsa on the side and a bowl of Greek yoghurt (or better yet, yoghurt and garlic sauce), and let everyone wrap up their own fajitas. 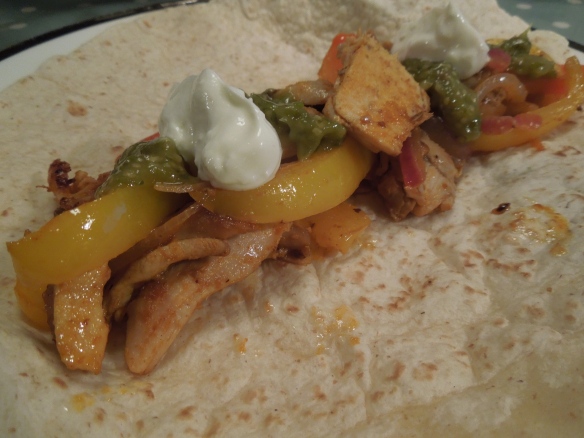