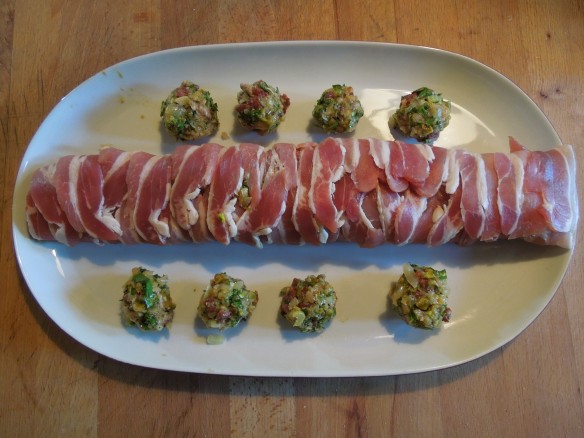 This is really good hot or cold. It’s great for supper with dauphinoise potatoes but allow it to get cold and cut it into thin slices and it makes terrific party or picnic food.

The bacon wrapping helps stop the tenderloin, a delicate cut, from drying out.

A big handful of chopped parsley

A double handful of breadcrumbs

I forgot to include the parsley here

Finely chop onion and celery and fry gently in a little oil until they’re soft and golden.

Skin the sausage and chop it into small dice. Chop the garlic and add sausage and garlic to the pan. Cook briefly.

Trim the pork fillet of any membranes and tidy up the thin end so you have a roughly rectangular piece of meat.

Discard the membrane but chop the meat trimmings and add them to the stuffing mix in the pan.

Put the pan’s contents into a large bowl and mix in the breadcrumbs, the finely chopped parsley, the pistachios if using and the egg. Season with salt and pepper. Set aside to cool.

Put the pork fillet on a board and score two parallel lines along its length, being careful not to cut all the way through.

Take a rolling pin and bash the pork until it has flattened into a wider rectangle. It’s less messy if you put a piece of grease proof paper over the pork.

Lay the bacon rashers on the board, each one overlapping slightly. Place the pork fillet on top, its length running the opposite way to the bacon – please see the picture below – then put a line of stuffing down the centre of the meat. Don’t overdo it or it’ll be too fat to roll up.

Roll it up, pulling the ends of the bacon rashers on one side into the centre, then the other. You should end up with a fat sausage.

Roll any remaining stuffing into walnut-sized balls then cover with plastic wrap and put it all into the fridge to firm up for anything up to 24 hours.

Put the fillet, with the seam underneath, in a roasting tin with the stuffing balls around it. Put a little butter on the fillet, cover with foil and roast for 40-45 minutes, removing the foil for the last 10 minutes.

Allow to rest then slice into small rounds, each with its nugget of spicy stuffing.

Serve with a thin gravy made from the pan juices and a splash of dry white wine or cider.

Or allow to cool, refrigerate, then cut into thin rounds to eat cold. It’s tasty either way, but I think it’s almost better cold.

It makes a rather elegant buffet dish and it’s easy to transport for a posh picnic.