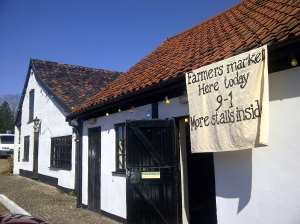 Last Saturday we went to the monthly farmers’ market in Harleston just over the border from us in Norfolk.

It wasn’t an especially big market but the produce was excellent and we went because we knew one particular man was going to be there.

This was the amazing Jimmy Denny. I say amazing because, like most livestock farmers, he works like a demon (he’s just finished lambing) and because he really cares about his animals. But mostly, and call me selfish if you will, because the meat he produces  tastes fabulous.

Jimmy breeds sheep, some of them Suffolk Crosses but most of them Texels. Originally from the Dutch island of Texel, these sheep were crossed with British breeds in the late 19th century and developed into what the British Texel Society calls “a large and prolific sheep … popular for its well fleshed but lean carcass”.

I can honestly say, hand on heart, that it’s the best lamb I’ve ever eaten (and I’ve eaten a lot of lamb).

He’s not paying me to say this, by the way, and I pay full retail price for any meat I buy from him.

Jimmy is committed to high welfare standards. When the lambing season is over the sheep are put out to graze on the grassland at his farm in Alburgh in south Norfolk.

In addition they eat the barley mash left over from the brewing process at Grain, the Alburgh village brewery. The sheep love it and the brewery has a good home for what would otherwise be a waste product.

The bitter is really rather good too. I sampled a pint just so I could tell you that. It’s a tough life being a blogger.

Jimmy butchers the meat himself and sells it via farmers’ markets and direct from the farm by appointment.

He also supplies a well-known local gastro pub and restaurant.

His company is called Alburgh Lamb – he doesn’t have a website but you can email him at piedbridge@aol.com or call on 01379-852379.

Listen to a short interview with Jimmy Denny here:

We bought a leg of lamb, not new season, which had already sold out at the farmers’ market, but the last of the old-season lamb. I must admit I wasn’t sorry – I prefer the flavour when the lamb is more mature and it’s had time to run around eating grass and putting some meat on.

Jimmy’s Texel sheep are chunky beasts and the leg we had weighed two and a half kilos, about  five and a half pounds.

I don’t like to gussy about too much with meat of this quality so I went down the garlic and rosemary route. 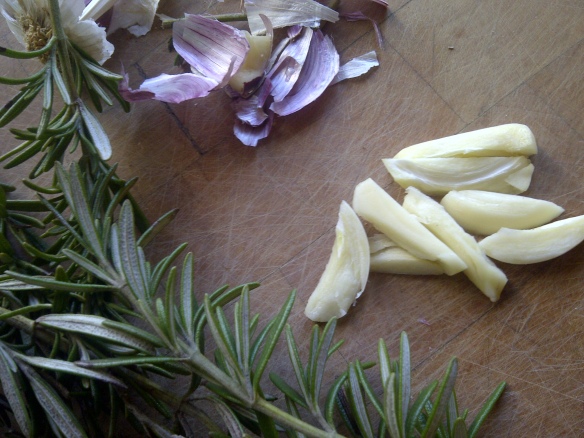 With a sharp knife, cut small slits in the surface of the meat. Push small sprigs of rosemary and slivers of peeled garlic into the slits. Stuff them well down because if you leave bits sticking out too far they will burn and taste vile.

Rub the joint lightly with olive oil and season with salt and freshly ground black pepper.

Peel a medium onion and cut it across into three thick slices. This will be your trivet. Push any remaining rosemary sprigs between the onion and place the lamb on top.

The onion trivet prevents the lamb from sitting in its own fat as it cooks and together with the rosemary adds fabulous flavour to your gravy.

I like to pour a small glass of wine into the pan at this point. It doesn’t stop the meat browning (because it’s sitting on its trivet) but it does stop the onions from burning before enough fat comes off the meat to anoint them.

Top it up with a little water or stock if it looks as though it’s burning off.

I like my lamb pink so I cook it for 15 minutes per pound or 12 minutes per kilo then add 15 minutes for the pot. So this one got half an hour at 475F (240c) and another hour and 10 minutes at about 400F. (My cooking temperatures can be a bit erratic, I use a Rayburn so adjust to your own oven and preferences).

Don’t forget to rest the meat, it makes it taste juicier. I put it on a warm plate, cover it in foil and wrap it in a towel for at least 20 minutes while I make the gravy.

We served the lamb with roast potatoes, lightly steamed savoy cabbage tossed with a scrap of butter and a pinch or two of fennel seeds, gravy made from the pan juices, and a choice of mint sauce and home-made jellies (redcurrant, quince or chilli and crabapple). I’m sorry, we were all so busy eating it that I forgot to take any more pictures.  We all had seconds.